Skip to content
30/11/2021 2:22 AM Tuesday
Trending Today
India offers support to Africa to fight variant
Corporation continues relief work amid a flood of calls
‘Reimburse only 75% of fees to schools for RTE admissions’
Assembly session in Mumbai from Dec. 22

30/11/2021 2:22 AM Tuesday
Trending Today
India offers support to Africa to fight variant
Corporation continues relief work amid a flood of calls
‘Reimburse only 75% of fees to schools for RTE admissions’
Assembly session in Mumbai from Dec. 22 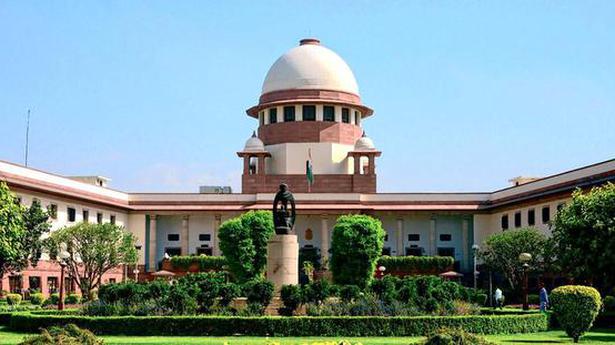 The Supreme Court did not accede on Tuesday to a plea by the Trinamool Congress to postpone the conduct of municipal elections in Tripura, saying such step was a “last and extreme recourse”.

A Bench of Justices D.Y. Chandrachud and Vikram Nath, however, directed the Director General Police of Tripura and Inspector General (Law and Order) to meet with the State Election Commission on November 24 to assess the number of CRPF required to “ensure the peaceful conduct of elections”. The officers should then requisition the CRPF or the Ministry of Home Affairs for the forces. Voting for civic body elections is scheduled on November 25.

“The DGP and IGP shall take all steps to ensure that election process is conducted in a peaceful manner, particularly on November 25, leading up to the counting of ballots on November 28,” the court directed.

The court said that while “we are not inclined to accede to the prayer for postponement of elections”, it would be the duty of the DGP, IGP and the Home Secretary to assuage any misgivings about fairness in the electoral process in Tripura.

Noting that the law enforcement agencies in the State have to act in an “even-handed, non-partisan manner”, the court cautioned the DGP to scrupulously abide by the court’s directions to obviate the need for it to take “coercive action”.

The court directed the State to provide a tabulated statement of the complaints lodged, FIRs registered, action taken, arrests made, to be filed along with a compliance affidavit on November 25, the next day of hearing of the case.

During the hearing, the Trinamool Congress accused the State and the police of being mute spectators while goons roamed the street, indulging in wanton violence against its candidates. The party, represented by senior advocate Jaideep Gupta, produced photographs in court allegedly of “severe violence” meted out by helmeted men even as the “police look here and there”.

Mr. Gupta said there has been instances of ransacking, a journalist was beaten up and political workers are being “driven out”.

“All this would have a direct effect on the workers… Please give orders to bump up security, then grant a week for campaigning without fear of violence. This would not cause a significant change in the democratic process. Campaigning itself has not been possible. Voters’ confidence are low,” Mr. Gupta submitted.

The Tripura government, represented by senior advocate Mahesh Jethmalani, said the petition by Trinamool Congress is a “politically contrived” one, filed in the Supreme Court on the eve of the elections.

“How many arrests have you made,” Justice Chandrachud asked the government even as Trinamool said the “only arrests made so far is of my party members”.

“What do you mean by ‘appropriate legal action’? Have you made any arrests,” Justice Chandrachud quizzed.

Mr. Jethmalani said, “no arrests have been made for scuffles”. He referred to a Supreme Court judgment which dissuaded arrest if the offence attracted a punishment less than five years’ imprisonment. He said 10 FIRs have been registered on incidents which were “minor skirmishes” between members of the Trinamool and BJP, the ruling party in the State.

He said two out of three battalions of CRPF stationed in Tripura were already deployed to protect the elections.

“The problem is with their performance, which is abysmal. They have been standing around as violence goes on,” Mr. Gupta said pointing to the photographs.

Mr. Jethmalani countered that these photographs did not have any probative value of evidence.

Mr. Gupta then referred to a statement from the State police chief which said more could be re-deployed from other parts of the State by “thinning-out” existing deployment in the State or from Jammu and Kashmir.